If you want to learn more about the businesses that I have invested in, then follow the links below...

An effective coach needs some basic tools in their locker, but also a broad knowledge of what works in different scenarios and with different people.  This only comes through experience.  I have been fortunate to gain a plethora of helpful insights through working in different industries and across many countries around the world.

I started my working life in manufacturing in Quality and Production roles. Asset stripping companies in my late twenties was a sobering experience!  In 1989 I joined an embrionic implementation consultancy (now known as Hitachi Consulting).  This was a time of great learning for me, as I had to deal with all types of barriers to organisational and personal change.  This was my grounding in change management and my personal experiences would verify the assertion from John Kotter (Harvard University) that 70% of major change programs fail due to their focus on process at the expense of people.

Later in my time working as a consultant, I was to study Manufacturing Strategy at INSEAD, which covered many aspects of lean manufacturing from Cellular Manufacturing, Kan Ban, Six Sigma, etc.  During my time there, I worked in the Oil & Gas, Automotive, Electronics, Aviation, Engineering, Food & Packaging

and Textiles industries in the UK, Germany, France and Belgium.

In 1997 I decided to put my consulting experience into practice in industry after being headhunted by ASCO, the leading oil & gas logistics and environmental business.  This coincided with an exciting period of devleopment and growth, both domestically and overseas (Norway, Denmark, The Caspian, Canada, USA, Brazil, Trinidad).  In 1998 I became a main board Director of ASCO and also experienced a last minute failure of our floatation on the New York Stock Exchange in 2001.  In addition to my main board position, I was also a director of ASCO UK, ASCO Norge (a JV with Seabrokers AS), Humber Offshore and Chairman of Aberdeen Cargo Handlers.

In 2003 I left ASCO and founded a Culture & Behavioural Safety Consultancy called Optimus Seventh Generation.  In 2011, I moved from CEO to Chairman of this successful business that had offices in the UK, Norway, Australia and Brazil.   Optimus was where I picked up a lot of my softer skills, with training on Neuro Linguistic Programming, Psychological tools and Authentic Leadership.  I sold the business to Dekra in 2015.

I subsequently spent some time consulting in the Oil & Gas Industry, mainly with EnQuest and BG Group, before investing in WhyNot Partnering and OEM Group.

I don't think I will ever stop learning or improving (I hope) - I am far from perfect! 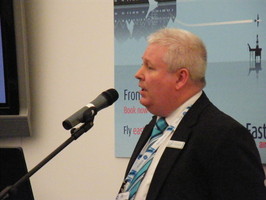